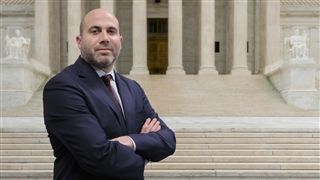 Before a packed ballroom at the Barrister’s Club in downtown Allentown, Cohen, 41, of Upper Macungie said he wanted to be a judge so that he could serve the community where his family has lived for generations.
“Too many people look at the courts with fear and dread,” Cohen said. “The courthouse should be a place where people can have hope. A place where wrongs can be righted. A place where people’s lives can be changed for the better.”

Cohen is vying for the seat left open when Judge Carol K. McGinley retired in 2017. McGinley still serves as a senior judge for Lehigh County.
A Democrat, Cohen said he will cross file to appear on both parties’ ballots.

Cohen is a partner at the Allentown firm Lesavoy, Butz and Seitz, and has focused primarily on civil litigation and commercial law.

He graduated from the University of Vermont and earned his law degree from Lewis and Clark Law School in Oregon.

Early in his career, Cohen served as a clerk to former President Northampton County President Judge Robert Freedberg, who went on to become a Pennsylvania Superior Court judge. He called Freedberg his mentor.


Cohen credited his late father-in-law, Franklin Van Antwerpen, a judge of the U.S. 3rd Circuit Court of Appeals, with igniting his love of the law.

“He took me to his courtroom back when I was in college to show me that justice could be administered with care and compassion,” he said.

Cohen recounted visiting the U.S. Supreme Court with Van Antwerpen and reading the inscription on the courthouse: “Equal justice under law.”

“Four simple words, but filled with such rich meaning,” he said.

Outside of work, Cohen serves on the board of directors of the Jewish Day School of Lehigh Valley and on the Executive Board of the Judge Donald E. Wieand, Sr. Barristers Inn.

Cohen and his wife, Virginia, have two children.

“Growing up in Lehigh County and now raising my own family here, I am committed to our county and its people,” Cohen said. “I am running for judge to serve them.”

Judges at the county level in Pennsylvania, officially called the Court of Common Pleas, serve 10-year terms. The salary is $180,299.

This article originally appeared in The Morning Call. Read the full article here.