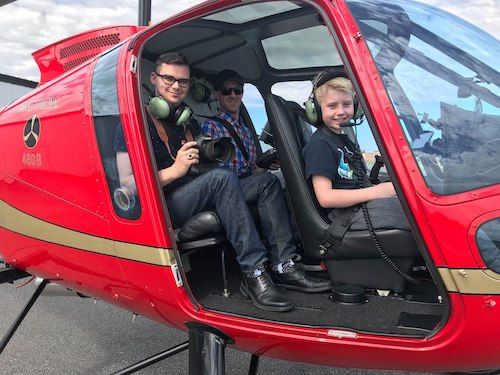 The country Cuba written on the roof, a nod to communism on a pillar of capitalism. It was one of the Martin Tower views WFMZ saw 400 feet above the ground.
"Probably most recognizable landscape in Bethlehem from far away, so will change the landscape forever," said Ted Rosenberger ’84.
In his Enstrom 480B turbine helicopter, Rosenberger, a chopper charter pilot, took 69 News photojournalist Ethan Walthier and reporter Bo Koltnow up into the clouds for a fly-over just days before the tower comes crashing down.
For Rosenberger, who flies out of Allentown's Queen City Airport, the impending implosion has been a potential boon for business.
"I've had a ton of people request to rent the charter flight for that morning seeking the best seat in the house for the historic occasion," he said.
He eschewed the offers, instead offering the perfect Sunday morning seat to the National Museum of Industrial History.
"Seemed like the best thing to do, to give it to the museum to preserve the memories of Martin Tower forever," he said.
Memories air traffic controllers will miss. Rosenberger says LVIA has used the tower to judge visibility, as it sits two miles from the airport's control tower.
Today, even in a sea of green, the imposing steel is impossible to miss. Sunday may mark the end of an era but as we rode over the blast furnaces, Ted's ride shows there's no chance of Bethlehem Steel being a "flyby" to history.

This article originally appeared on WFMZ-TV on May 16, 2019. View the full article here.