At age 100, Allentown woman recalls work to make life better for deaf people like her 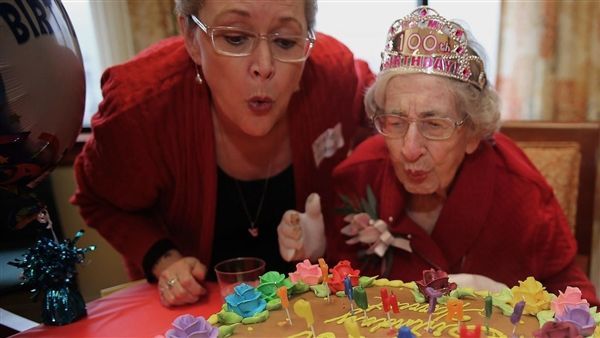 Harriet Seebald MacDonald has lived most of a century bridging the gap between the worlds of the hearing and the deaf.
At the celebration of her 100th birthday Sunday, members of Pennsylvania’s deaf community gathered with MacDonald’s friends and family to recognize her contributions to making the Lehigh Valley a more inclusive place for the hearing impaired.
MacDonald, who lost her hearing before age 2 but remained able to speak, gave aid to the hearing impaired who didn’t share her multifaceted communication skills and illuminated the lives of the deaf for those who could hear.
“She exposed the hearing world to the fact that it was OK to be deaf,” said retired pastor Bruce D. MacLaughlin, who led the Lutheran Church of the Deaf in the Lehigh Valley, where MacDonald was a member for many years.
Bejeweled in a plastic tiara that said “It’s my 100th birthday,” MacDonald, offered a few words of advice after blowing out candles on her chocolate frosted cake.
“Keep your life interesting,” MacDonald told those gathered at Luther Crest Personal Care Center where she lives in South Whitehall Township. “Walking makes it better,” she added, attributing her longevity to her favored mode of transportation. MacDonald never learned to drive.
Interesting is an understated way to describe MacDonald’s life, said her longtime friend and American Sign Language interpreter Carole Silvoy.
Born in Allentown to parents Harry and Edith Williams Seebald, MacDonald lost her hearing after contracting scarlet fever as a toddler. After struggling in school, MacDonald’s mother, a fierce advocate, enrolled her at Pennsylvania School for the Deaf in Philadelphia when she was about eight, Silvoy said.
Each Sunday evening MacDonald’s mother took her to school in Philadelphia’s Mount Airy section and returned to take her home on Friday nights so that MacDonald could spend the weekend in Allentown with her brothers.
Peter Bailey, head of school at Pennsylvania School for the Deaf, recognized MacDonald on Sunday as the institution’s oldest living alumnus. The school will celebrate its bicentennial in April.
“She’s been around for half the life of our school, so she’s a big part of our history,” Bailey said. “Now she has her own story.”
Silvoy said that MacDonald’s early experience with language at school set her on a path she would follow for the rest of her life.
As a result of her immersion in the deaf community at school, MacDonald learned to sign. But sign language was officially frowned upon, Silvoy said, because experts believed it would keep the deaf from communicating with those who could hear, so MacDonald also learned to read lips to understand her lessons.
After graduating with honors from Philadelphia School for the Deaf in 1939, MacDonald went on to attend Moravian Women’s Seminary, where she graduated in 1943.
MacDonald married Kenneth J. MacDonald Sr., who was also partially deaf, in 1950 and the couple had a son, Kenneth Jr. She had jobs in the Allentown controller’s office and at Western Electric, but it was MacDonald’s volunteer work, including many hundreds of hours at Good Shepherd Rehabilitation Hospital, that defined her, Silvoy said. The hospital honored her with the Conrad Raker Award, named for its founder, in 2000.
Among her achievements for the deaf community, was the establishment of a teletypewriter relay service — a system that allows the deaf to communicate by telephone by transmitting text — in the Lehigh Valley years before it was required by the Americans with Disabilities Act, Silvoy said.
MacDonald refused to be limited by her hearing impairment, traveling to nearly every continent, often by herself, Silvoy said.
MacLaughlin said MacDonald’s ability to network made her an integral part of the Lutheran Church of the Deaf congregation.
“She knew what was going on in everyone’s lives,” McLaughlin said. “It kept the deaf community in the Lehigh Valley connected to one another.”
Her ability to talk as well as use sign language made her confident as an advocate for deaf people who weren’t as comfortable interacting outside relatively small circle of people who sign, MacLaughlin said.
“Harriet felt really good about who she was,” he said.
In this 1999 Morning Call photo, Harriet MacDonald relates stories to members of a deaf senior citizens social group at the Lehigh County Senior Citizens Center. The group met twice a week to share stories and play cards.
This is what was happening in 1918, the year Harriet Seebald MacDonald was born:

This article originally appeared in The Morning Call. ﻿To read the full article, click here.