Why the "Human Factor" Matters in the Practice of Law 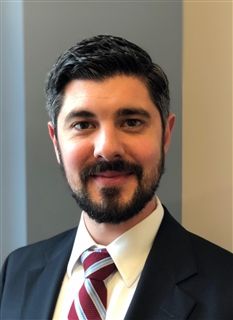 In the face of sometimes pronounced criticism of the American justice system, Gabe Vidoni ’00 - a prosecutor with the U.S. Department of Justice since 2014 - points to the overlooked human factor of the legal process.
“I appreciate that there is energy and effort given to reforming problem areas within the system, but what people often don’t witness is that empathy and humanity are important to many people in my position,” said Gabe. “While the law objectively governs relationships between people, at the end of the day, we are all human beings in the judicial process. Empathy is an important factor in advocating on behalf of the public in an appropriately measured, fair, and just way for all parties and interests involved.”
Gabe’s understanding of the importance of having compassion for others, within both his career and his life as a whole, has early roots in his time spent at Moravian Academy. Gabe, who enrolled in 1996 before his freshman year, recalls how the theme of connectedness was a constant part of his education, particularly in coursework ranging from English classes to history as well as in community gatherings such as Moravian’s chapel program.
“Moravian instilled in me a strong appreciation and enjoyment in engaging in critical thinking to understand the challenges that we face in society,” shared Gabe. “In history classes, English classes, in chapel, there was constantly a dialogue about how we could work together as a community to address social challenges and come to understandings across groups.”
As part of his role as an Assistant United States Attorney in the Criminal Division, Gabe prosecutes crimes under federal law, focusing primarily on violent crimes, narcotic and firearm offenses, crimes against children, and, more recently, public corruption casework. Due to the nature of some of these offenses, Gabe regularly comes across cases that test his sense of empathy.
“We deal with some really awful crimes against children and it can be difficult to understand the perspective of someone who would harm a child,” said Gabe. “Those, in addition to certain violent crime cases are especially tough, but across all cases, we have a responsibility to maintain empathy in how we approach prosecutions, particularly at the sentencing phase. People commit crimes for a myriad of reasons and an important part of a just outcome is taking into account why someone may have engaged in what they did, what circumstances surrounded the crime, and ultimately, that all defendants are treated with dignity and respect throughout the process. If you do not attempt to come to some understanding of those circumstances and remain mindful of human fallibility, you lack empathy and ultimately can’t proceed in an ideally fair and measured manner.”
While Gabe recognizes the perspective of a defendant facing punishment, the impact on victims and the public at large also weighs heavily when determining what type of sentences that he, and others in his position, advocate for in court. Said Gabe, “In dealing with the victims of crime, it’s important to understand the ways an event - often a single point in time - has deeply affected their lives and to adequately give voice to that as part of a criminal proceeding. It is also important to take into account the impact on society as a whole, as well as departmental policies and statutes, which we are obligated to follow.”
Prior to his current role, Gabe worked in a private practice firm representing corporate clients in civil litigation. Seeking to connect with individual clients on a more personal level, Gabe volunteered with the Homeless Advocacy Project, which works to meet the legal and advocacy needs of homeless individuals and families in Philadelphia. In a notable case, Gabe won $30,000 in back compensation, as well as $2,800 in monthly benefits, for a homeless disabled veteran in 2014. In only nine months, Gabe’s advocacy accomplished what this client was unable to accomplish on his own in the 36 years he’d been seeking help from the U.S. Department of Veteran Affairs.
“This volunteer work was very rewarding in that it allowed me to connect with and better understand the perspective of people who had gone through experiences in life that were very different than my own, many of whom were suffering from PTSD, addiction, poverty, homelessness and other tremendous disruptions in their life,” said Gabe. “The experience gave me a far better understanding of their circumstances and allowed me to use my skills as a lawyer to substantially impact people’s lives in a positive way.”
When asked why empathy is important for Moravian Academy students to embody, Gabe concluded, “We live in an increasingly interconnected and diverse world. Empathy is vital to protecting against the troublesome but almost innate tendency to exclude people in an ‘us and them’ capacity. Regardless of our backgrounds, we have far more in common with each other than we do in differences.”

This article appeared in the Spring 2019 Moravian Academy Journal on pages 24 and 25.