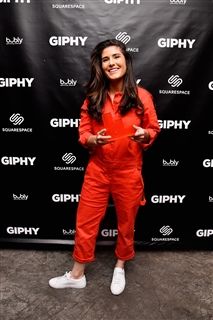 Filmmaker Ani Acopian ‘12 recently took home the grand prize at the first ever GIPHY Film Fest, which celebrated micro-films that tell stories in 18 seconds or less. Chosen from over 900 submissions, Ani’s work, “Washed Up,” was filmed by drone in Reynisfjara, Iceland.

“I think it’s really cool that GIPHY [a database and search engine for GIFs] put on this event since it’s the first of its kind. It’s epic to be a representative,” said Ani. “Video doesn’t need to be long to get across an emotion, concept or story. My main goal is to make work that is eye-catching and different.”


“Washed Up” is not a one-off creation for Ani. She has produced short films for well-known brands, including Red Bull, Chipotle, Snapchat, Budweiser, Samsung, and W Hotels.


“My favorite part about working in the creative industry is that it feels like there are no boundaries,” said Ani. “I don’t have to stick to a linear career path and I’m in control of my own destiny. I work hard and set goals, while not being held down by traditional roles.”
A lifer at Moravian Academy, Ani recounted photography and video classes throughout high school with Upper School teacher Mrs. Lindsay Woodruff, whom she considers to be one of her earliest mentors and supporters. 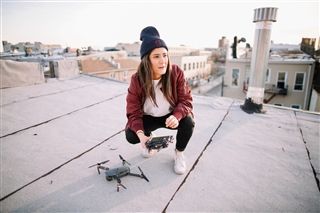 “The classes I took with Mrs. Woodruff in 11th and 12th grade were super formative because I had never shot on film before, or had someone push me to create better work. I was more passionate about the assignments in her classes than any other homework I’d ever had, which was a sure sign that I had found something special,” said Ani. “I experimented more in her senior filmmaking class than I did during my entire time in film school.”


Ani also recalls consistently bringing her camera to classes to film YouTube videos, most memorably those produced for her class president campaign with Sarah Brown ‘12.


“I remember creating rap videos with Sarah to convince people to vote for us,” said Ani, who served as co-president with Sarah both her junior and senior year. “That’s when I first realized that advertising could have a real impact.”


To Moravian Academy students interested in pursuing the creative industry, Ani stated, “If you have a passion, go after it and don’t give into your fears. “A lot of people think the creative industry doesn’t pay well or is hard to break into. Your passion will take you a lot further than any statistic that’s not in your favor.”

This article appeared in the Winter 2019 Moravian Academy Journal's "After Moravian: Creative Paths" section on page 31.

WASHED UP from Ani Acopian on Vimeo.